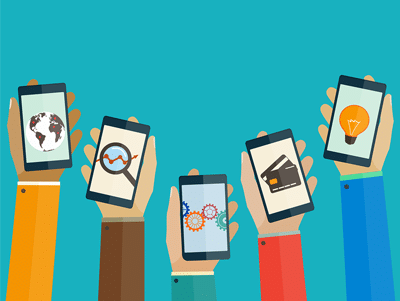 I don’t know how often you’ve had to attempt to edit campaigns on mobile but let’s say you leave the office and realised you hadn’t set a bid adjustment or paused something or added a new ad group. Annoying to do on your phone’s browser right? Google’s newly released AdWords app has arrived to make mobile campaign management easier…

It’s clean, almost too clean. When you’re used to the overwhelming appearance of the desktop AdWords interface it’s a surprise to see such a user friendly interface on mobile, and definitely a pleasant one.

When in an account I quite like the standout Opportunities features, it’s bold and highlights quick optimisations at a glance. That said, it’s hard to know how useful they actually are, and budgets are always something that can be increased to gain more clicks!

The account screen shows your headline numbers and date range and one bugbear I had on desktop was that changing custom date range was clunky, compared to Analytics where it’s much easier. Well, in the AdWords app it’s a quick and easy process!

It might not seem obvious at first, but the account overview also has a carousel so you can navigate from impressions to device type and so on, this is really good for accessing useful data quickly. The question is can we edit what appears in the carousel based on what’s useful for that client?

Pressing down on the item doesn’t do anything, no edit option becomes available. This would be an option I would like to see in future iterations- if a user can optimise the efficiency of the app by pre-arranging their data then it would mean that we don’t even have to dive into the campaigns, because on first load we would see the data we need.

The design is clean but I feel like somehow it’s not as clear as it could be. I wonder if the columns could have alternate tones just to distinguish them a little more easily, but it’s a minor quibble.

One thing they have done right is customisable columns because let’s be honest I think most of us will be mostly concerned with conversions, costs, clicks and cost per click data and to be able to specify that easily is a really useful feature. Similar to how I feel about the account overview carousel and how that should be.

Another useful feature, although perhaps a little obvious, is the ability to hide paused data. I think this option should maybe have been enabled by default, but that’s just a personal preference.

Diving into campaign data sees the return of that carousel- still not customisable! Not really a lot to see here and without the ability to customise the carousel I can’t see much benefit in sticking around on this screen other than to navigate elsewhere. I can edit the campaign title though, which is at least something.

Like the account overview, I can edit columns and pause the ad group but beyond that I can’t do much else. That being said, I can edit bids at ad group level which might prove useful as well as changing its name, in case for some reason you’re bored with the name you’ve given it.

Now this is where the magic happens! I really need to change that keyword from broad to match modified. This should be a doddle as finally I don’t need to use the desktop site version on mobile!

Wait a minute… I can’t edit keywords?! That can’t be…you mean to say I can needlessly change a campaign name and ad group names but I can’t change and edit keywords? That’s disappointing. That’s not to say the app is entirely useless now, but I had hoped that the bread and butter of AdWords, keywords, would be able to be edited in the app. I can edit bids but this doesn’t go far enough in my opinion, I would sacrifice some of the other functionality for the ability to edit keywords. I understand that it is the first version but I would have thought keyword editing would be a priority. I’m suddenly worried about the Ads section of the app…

My fears have been confirmed – Ads cannot be edited, just enabled and disabled, I’m not really sure why not.

This app is a kind of a crossover between reporting and editing. All in all it’s a pretty good app because from a reporting on mobile point of view you can easily access data, but not as easily as I think it should be. In a way, I’d prefer that it was just a reporting app and do a better job of allowing users to organise data so that on first load they can see customised data- would that not be better than pre-set data that you then need to drill down into?

I have the same feeling with editing, maybe I’d tolerate a more complicated, less user friendly interface if I could actually apply some real edits rather than superficial ones like campaign names and bids here and there. If it’s going to offer editing perhaps it should offer a fuller range of editing options.

Overall, it’s not a bad first attempt and seeing as Google has gone down both the routes of editing and reporting I still think it has a way to go to be truly useful.